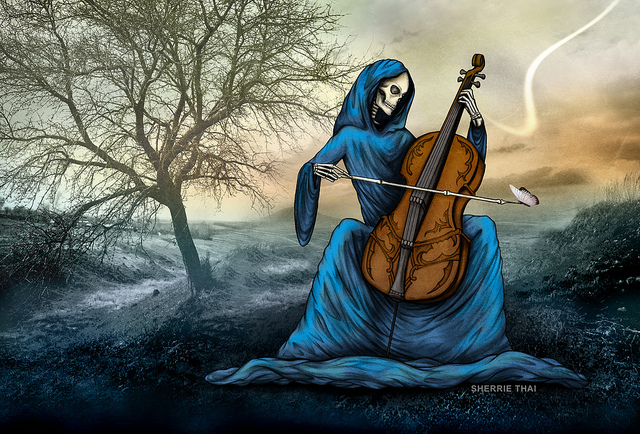 Why is it that when we watch a scary movie, our hearts begin to beat a little faster during suspenseful moments? The answer is what you hear underneath what you see. For decades, horror films have incorporated various musical tools to build suspense and fear. Classic films such as Jaws and Psycho pioneered these methods of building fear through their soundtracks. If you’ve ever been curious as to how the horror genre is so effective, these soundtrack techniques are the perfect place to start.

One of the most effective forms of composition to produce scary music is dissonance. Have you ever heard someone slap their hand down on a piano, hitting a cluster of notes? This is exactly what dissonance sounds like. Any music that incorporates close intervals will create what is known as tension. In most forms of music, this tension is resolved to create a sense of closure. In horror music, the tension is welcomed in full force without any resolution to be found. With all of this dissonance and building tension, the listener is put on edge and never feels closure, thus becoming primed for any jump scare.

Another incredibly effective compositional technique used by the likes of Bernard Herrmann in the Psycho shower scene is extreme ranges. Music composed in incredibly high or low ranges creates unsettling feelings. The classic example of the Psycho shower scene features shrieking violins playing in a high register the instrument wasn’t traditionally made for. This gives the violins an unusual timbre that invokes surprise. Another great example of a low register is the doubles basses of the Jaws theme.

The final most effective tool for invoking suspense and fear that composers use in horror films is the use of children’s music. When cheerful, playful music is used in a visually frightful scene, our brains become confused. We are hearing happiness while seeing fear. This cognitive dissonance brings the listeners a confusing sense of anxiety.

When a composer brings these tools of terror into their music, any moment of suspense is heightened to new frightful levels. Just imagine watching someone travel down a dark hallway are low, playful sounds pulse in the background when suddenly you hear violins shriek as a zombie jumps out and attacks! This is how music becomes scary.

The Trumpet • Copyright 2021 • FLEX WordPress Theme by SNO • Log in