Concerns Over the Johnson and Johnson Vaccine 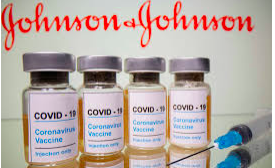 There is a lot of discussion and controversy surrounding the Johnson and Johnson COVID vaccine. There have been claims that the vaccine is made with fetal cells and that it has been linked to fatal health conditions such as strokes.

“Residents of Michigan receiving the Johnson & Johnson Covid-19 vaccine must be told it was developed using a stem cell line originating from an aborted human fetus, according to a state law passed by Republicans” (The Guardian).  Something that has become super political is the claims of fetal cells in the vaccine. Democrats claim that requiring businesses that are funded by the Federal Government to inform individuals about the fact that the vaccine is made with fetal cells is a hindrance to public health.

“The pandemic was never supposed to be political” (The Guardian). Many politicians and scientists claim that the pandemic was not used for political gain within political parties, whether or not to inform the public has been an arguing point for many politicians because they feel that having fetal cells in a vaccine is going to have an impact on who elects to takes it.

Another major concern for the vaccine is the pending health concerns that have arisen. The COVID symptoms directly after taking the vaccine were expected, but the number of strokes reported after taking the vaccine has caused renewed concerns. “A Chapel Hill woman who says her mother died of a stroke 48 hours after receiving the Johnson & Johnson COVID-19 vaccine spoke to WRAL News about her concerns and the questions she has about her mother’s death” (wral.com).

In response,  “The state and a UNC doctor, though, warn about drawing any conclusions yet” (wral.com). It may not all fall on the vaccine, because inflammatory drugs increase the risks of strokes and the vaccine is an inflammatory drug. Plus, “COVID-19 seems to trigger cardiac events: heart attack, dangerous heart rhythms, etc. All of these factors can lead to a stroke” (weillcornell.org).