Who is Wandavision’s mystery character?

The Disney + original, Wandavision was a hit from the start, not only is it amazing to fans of the Marvel universe, but it’s also interesting and loveable to people who aren’t fans of Marvel. This might be because of the way that each episode jumps from one iconic sitcom setting to another, giving off strong Lucille Ball energy in one episode and iconic Bewitched-like charm in the next. The sitcom aesthetic mixed with the dark twists and turns that suddenly occur, creates a mystery for viewers to attempt to solve, the talented cast that worked on this show claimed everything will be explained eventually but every new episode brings more questions and fewer answers. As if all the mysterious circumstances in the show weren’t enough, the actor who plays Vision, Paul Bettany, reveals that there will be a surprise cast member in the show that fans aren’t aware of and claims that he “… thinks that people are going to be really excited. I’ve always wanted to work with this guy and the scenes are pretty intense.”

Based on the “intense” scenes mentioned by Paul Bettany, you can expect this character to have some sort of action-based importance in the show. However, that doesn’t narrow down the list of potential characters or actors that could appear in a Marvel production. Most people assumed that Paul was referencing Benedict Cumberbatch who plays Doctor Strange, this is because Elizabeth Olsen will be returning to her role as Scarlet witch in the Doctor Strange sequel due to the fact that the events that take place in Wandavision will build up for Doctor Strange 2. What if Paul wasn’t talking about Benedict Cumberbatch? what if he was hinting towards a more surprising and unexpected character who hasn’t been in the Marvel Cinematic Universe (MCU)? When asked if the mysterious character reveal would be at the same level of shock and importance as Luke Skywalker appearing in the finale of the Mandalorian series, Elizabeth Olsen exclaimed “yes” and mentioned that she “is really excited,” This cuts the number of characters down by a lot. When comparing it to Luke Skywalker’s cameo, you have to expect a character that was in past Marvel movies that weren’t apart of the MCU like the X-Men. This claim makes some people think that Patrick Stewart may return as Professor X, or that Ian McKellen would return as his iconic role as Magneto from past  X-Men movies. 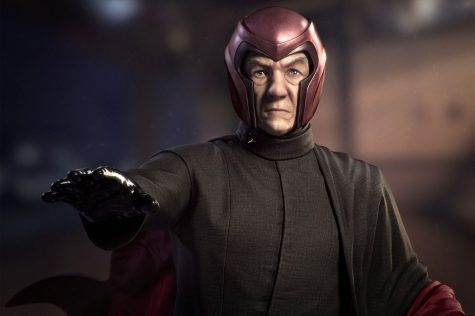 Why these characters? Well Greg Alba from the YouTube channel, The Reel Rejects explains “…it can’t just a legacy character but an iconic performance of character.” The actors Patrick Stuart and Ian McKellen played characters that seem like legacies and their performances definitely were iconic and loved enough to be what Elizabeth Olsen was referring to(in the context of comparing it to Luke Skywalker). Not only are these characters iconic and legendary but they are also mutant characters that can link the MCU to the X-Men, this is important because the MCU is working on a way to introduce mutants into their movies and Disney plus originals. Both characters have connections to Wanda Maximoff or Scarlet witch’s past on a personal level, Magneto is Wanda’s father in the comics and Wanda has fought with and against Professor X on multiple occasions. So, will the surprise character be an iconic member or antagonist from the X-Men? Will it be a character that’s already in MCU? Or will it be someone even more unexpected?