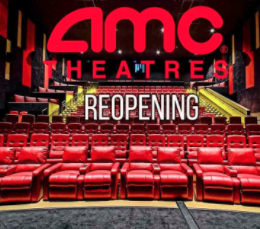 After six long, dreadful months, the wait is finally over. No more stewing in boredom, hour-long naps, or sketchy movie downloads. The theaters are finally reopening after being shut down by the Corona Virus! As of August 20th, over one hundred movie theaters have opened across the country, meaning social lives are returning! But all good things come at a cost. Various restrictions have been put in place to ensure consumer safety, but some question whether these newly instituted restrictions are as safe as the theaters say?

When senior, Selma Sanchez, from Cass High, was asked about the movie theaters reopening she had to say, “The real concern is the regulation of people for me, the theater can’t really space out a movie if it gets sold out. And if they move people to different rooms, other movies would have to be canceled. Also, the mandatory mask-wearing will be ineffective due to the fact of viewers purchasing food and their ‘so called’ comfort. Once the movie begins everyone will be taking off their mask because they think others simply cannot see them in the dark room.” The concern about safety is entirely reasonable, and movie theaters such as AMC have taken action to guarantee the safest environment for staff and moviegoers.

As a leader in the safe movie environment, AMC has published an informative video of their CEO, Adam Aron announcing, “We (AMC) have consulted with noted scientists and experts, especially, current and former faculty of the world-renowned Harvard University School of Public Health. Similarly, we’re partnering with the world leader in all things clean, Clorox. After extensive analysis and preparation, AMC is implementing a crucial new initiative, AMC Safe and Clean.” This new initiative highlights the importance of existing protocols such as social distancing, reduced capacity spaces, frequent hand sanitation, along with mandatory mask-wearing; as well as new ones such as area disinfection with Electrostatic sprayers, HEPA vacuums, and air filtration with MERV 13 vents. However, the implementation of such precautions comes at a steep price.

According to Travis Bean of Forbs, “AMC Theaters—by far the biggest movie theater chain in the United States—expects to post a $2.4 billion first-quarter loss in the wake of the coronavirus pandemic.” A percentage of the overall loss is due to the purchasing and utilization of new high-tech cleaning equipment and policies that are now in place to limit consumer attendance.

Cartersville’s own AMC theater as well as others in Georgia are selling tickets for fifteen cents a pop to celebrate their one-hundredth anniversary and reintroduce people to the movie theaters they know and love. They are also bringing back classic movies like Back to the Future and Goonies, as well as having an influx of new movies and trailers, hoping to get viewers excited for the 2021 year. So, search your couch cushions and the crevices of your car for spare change, and ready yourself for an adventure back to the movie theater. You can check out New Mutants and Raiders of the Lost Arc in the theater this Saturday!