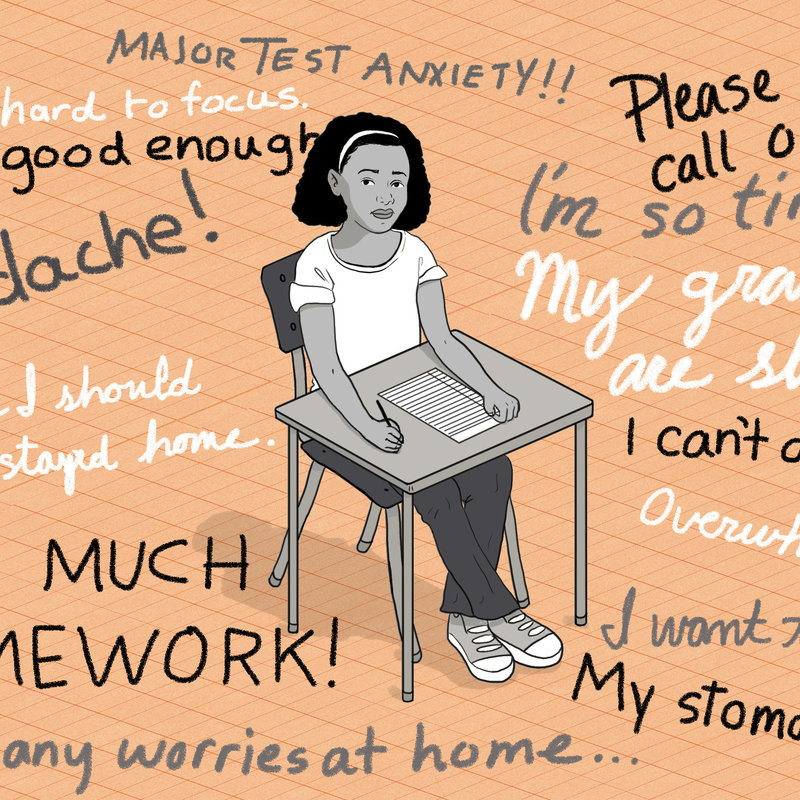 The Dangers of Overachieving

Students all over the nation are competing against each other for their futures. With colleges and universities becoming more competitive, students must take all sorts of AP classes and maintain a high GPA to have a chance of acceptance. These students—the overachievers, the perfectionists, the AP and honors kids—are battling against each other, but they’re also battling an internal adversary: mental illness.

According to the National Alliance on Mental Illness (also known as NAMI), 16.5% of U.S. youth aged 6 to 17 experienced a mental health disorder in 2016. That’s 1 in every 6 adolescents. Yet, there’s an obvious correlation between overachieving and mental illness. After all, many students believe that they must be perfect; they must get perfect grades and be perfect athletes and have perfect resumes that detail their perfect reputations. However, perfection is impossible. Alison Bowen of the Chicago Tribune states, “Often, perfectionists create even higher goals, which leads to a higher risk of failure and perhaps more failures.” When the bar is set so high, one is going to fail eventually, and for these high-achieving students, they beat themselves up over it. The pressure to never fail is a huge cause of mental illness. Paul Hewitt, PhD and Gordon Flett, PhD have spent almost thirty years researching perfectionism, and their work has “found that perfectionism correlates with depression, anxiety, eating disorders, and other mental health problems” (American Psychological Association).

Yet, it isn’t as easy to stop this perfection-driven behavior than one may think. For many students, their sense of self-worth comes from what they can achieve. From elementary school, students were awarded for their academic, athletic, and musical abilities, to name a few. As a result, students grow up with the belief that in order to be recognized, they must be the best. Trying one’s hardest isn’t good enough anymore, especially since everything is a competition now. According to Jennifer Breheny Wallace from the Washington Post, “Facing record-low acceptance rates at top colleges, many students feel tremendous pressure to achieve and resume-build in all aspects of their young lives. In the pressurized ecosystem of high-achieving schools, driven students must out-compete each other for few coveted spots, whether it’s a seat in AP calculus or a spot on the debate team. Even activities that once were stress-reducers, like playing a musical instrument or a sport, have become a means to an end, that end being a spot at one of the country’s most competitive colleges and then on to a prestigious, high-paying career.” This mindset that one’s self-worth is dependent on how much he or she achieves often leads to anxiety and depression. Suniya Luthar, a professor of psychology at Arizona State University has studied the correlation between mental illness and overachieving students for years. Her studies have found that “adolescents in high-achieving schools can suffer significantly higher rates of anxiety, depression, substance abuse, and delinquent behaviors, at least two to three times the national average” (The Washington Post).

These mental illnesses combined with the pressure to achieve have led to more detrimental consequences. According to the National Alliance on Mental Illness, suicide is the second leading cause of death among people aged 10-34 in the U.S., and the suicide rate has increased by 31% since 2001 (last updated September 2019). 17.2% of high school students and 11% of young adults aged 18-25 have serious thoughts of suicide. Jingduan Yang from the Epoch Times states, “While suicide is statistically more likely to claim the lives of young people, among the entire U.S. population, depression and suicide rates have risen by 28 percent in the 17-year period between 1999 and 2016, according to the National Institutes of Health, and […] overachievers are disproportionately affected.”

However, it’s not a bad thing to overachieve, is it? After all, setting high goals for oneself can result in a sense of motivation, of personal satisfaction, and of purpose in life (The Peak Performance Center). Yet, it’s safe to assume that this is a case of too much of a good thing. Overachieving is a double-edged sword, and it’s clear that it’s a weapon that must be wielded with caution.

The Trumpet • Copyright 2022 • FLEX WordPress Theme by SNO • Log in